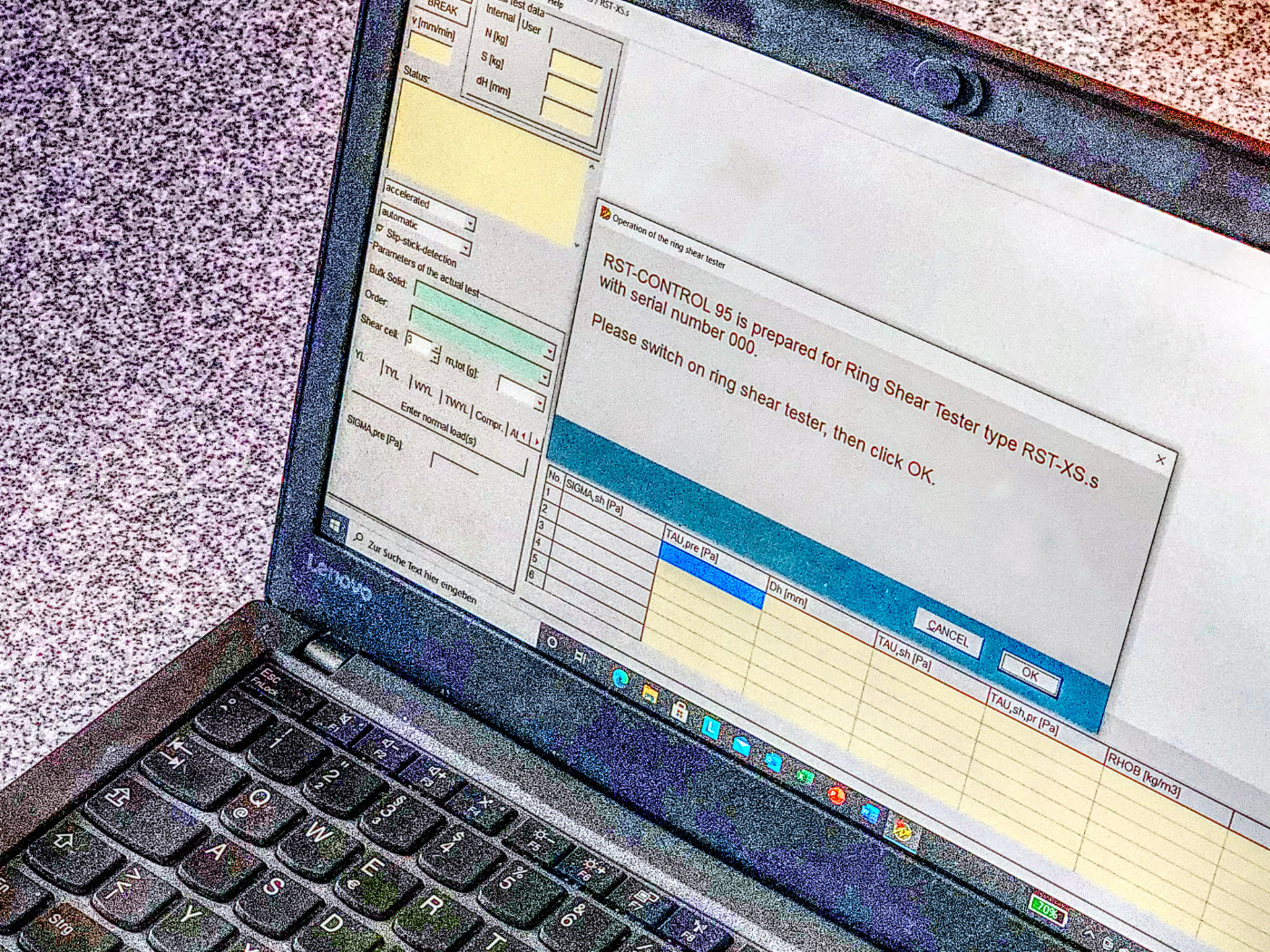 RST-CONTROL 95 in combination with a Ring Shear Tester RST-01.pc, RST-XS, or RST-XS.s covers the full range from the "normal"user, who needs test results, but does not wish to study the complete theoretical background of bulk solid's flow theory, to the bulk solid specialist, who intends to run tests at precisely defined conditions.

RST-CONTROL 95 provides several modes of operation, e.g. so-called standard test procedures for each type of test listed above, where the test parameters like the consolidation stress are entered once, and subsequently the operator just has to choose the "standard test" option from the program menu. After a few mouse-clicks the test starts. More experienced users can use a detailed procedure for entering the test parameters, or can load these parameters from a control file library. Thus, the Ring Shear Tester can be used for many applications, and it can be operated from personnel of different levels of "powder" education.

For special applications also a semiautomatic test mode is provided. At the semiautomatic mode the operator observes the measured data on the screen and controls the test via the PC keyboard. A manual mode is also available for individual measurement procedures where shear velocity and normal stress can be controlled via an input window.

After starting the program, RST-CONTROL 95 shows the evaluation window (picture below). Here, the different measurements (yield loci, wall friction tests, time consolidation, ...) can be viewed, edited and exported as graphics. If several yield loci of the same product were measured at different stresses, graphs of bulk density, unconfined yield strength, or internal friction versus consolidation stress can be plotted in diagrams. 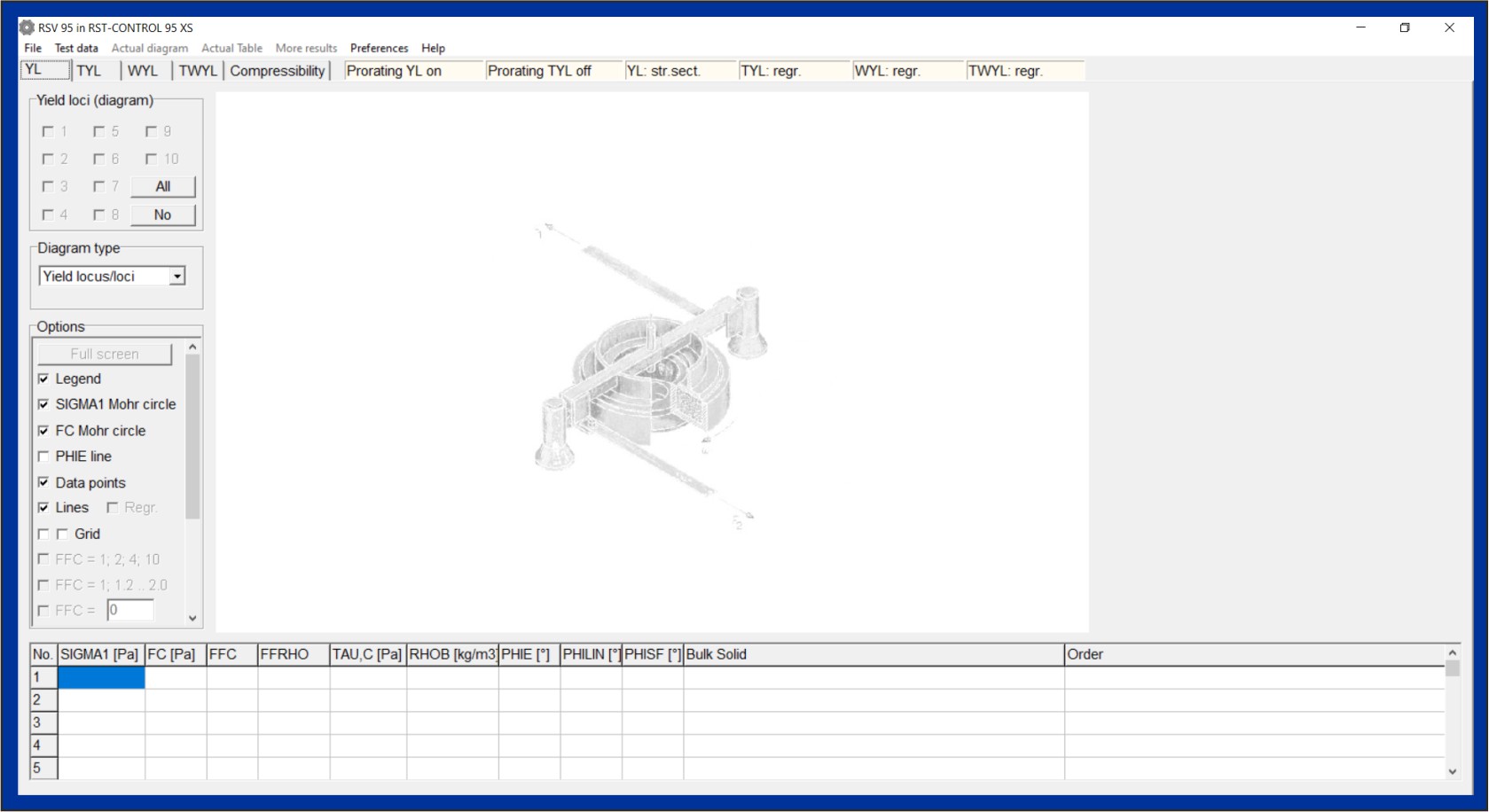 From the evaluation window you reach the measuring window  (RST-CONTROL 95 window, see figure below). In the lower left area of the window, select the type of measurement, e.g. YL = yield locus, or WYL = wall yield locus and select the number of the shear cell that shall be used for the test.  For entering the normal stresses of the test points are entered in a window. On the image the window for entering the normal stresses for a yield locus test is opened. Depending on the requirements, a standard test can be selected here, or previously created test procedures (CONTROL files) can be opened, or individual test points can be specified. 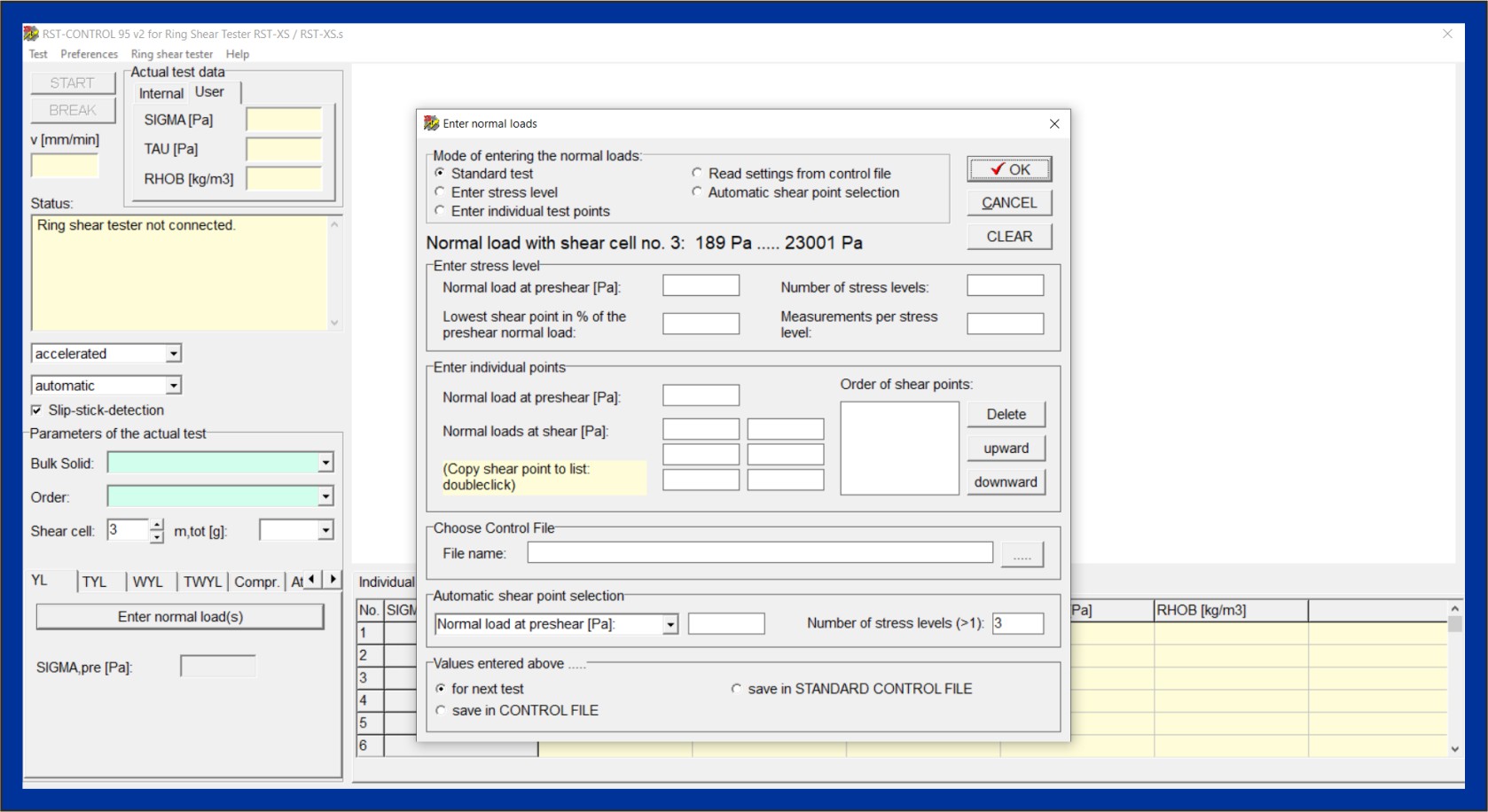 After the normal stresses, the name of the sample and the mass of the filled shear cell have been entered, the test procedure is started. As shown in the picture below, RST-CONTROL 95 guides you through the procedure: Place the shear cell on the tester, etc. This can also be done by voice output if the ring shear tester is a little distant from the PC. 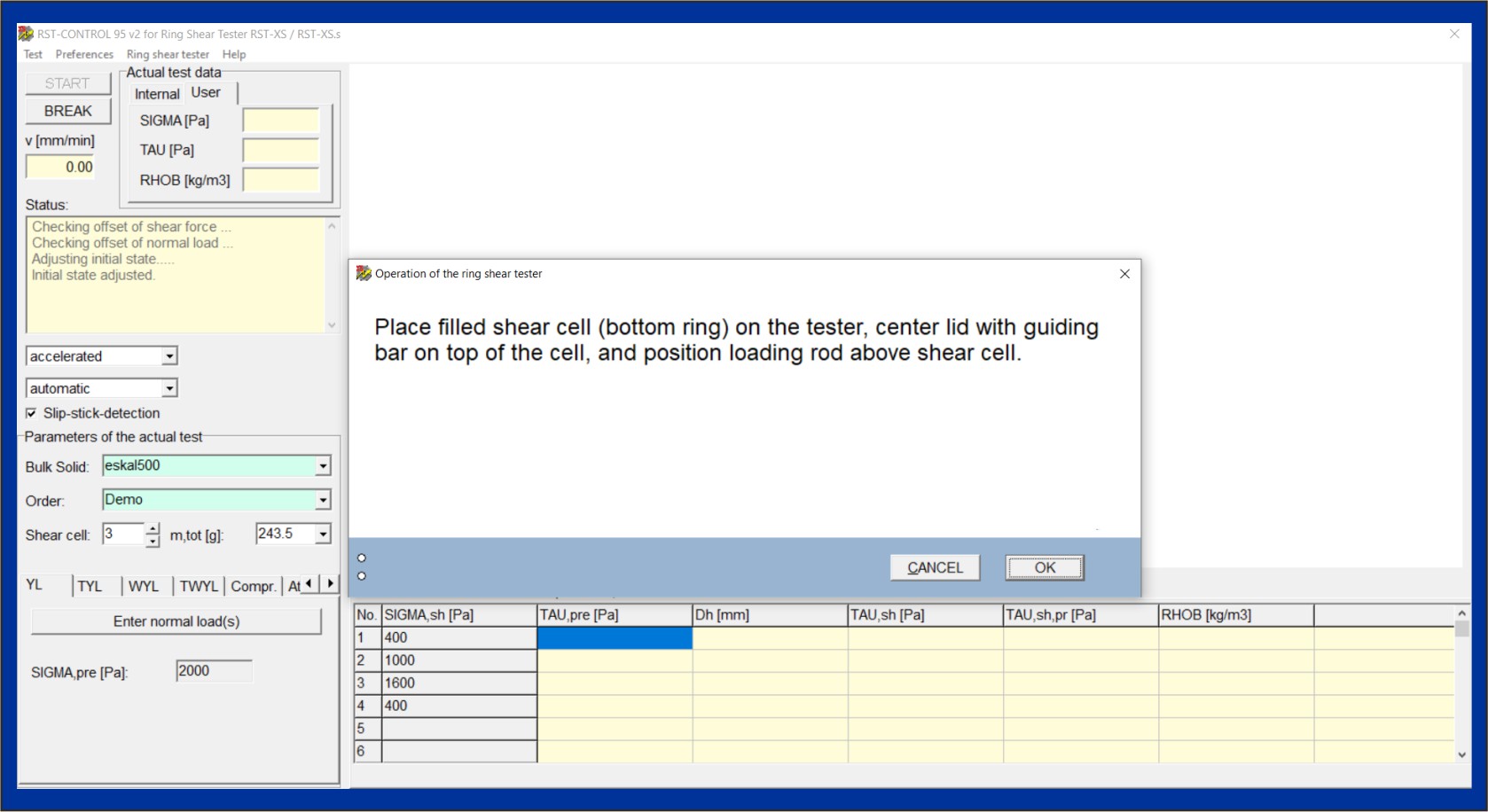 After the shear is placed on and connected to the tester, the automatic test procedure begins. On the image below, the specimen has already been presheared and sheared to failure three times for the measurement of a yield locus. The blue curve shows the shear stress over time. Due to the increase of bulk density, caused by the consolidation process, the shear cell lid has moved downward somewhat as shown by the descending course of the red curve "lid displacement". In the lower part of the image, the preliminary evaluation has been activated, where the yield locus constructed from the points already measured is displayed with the associated flow properties to the left (e.g., FC = unconfined yield strength, RHOB = bulk density). 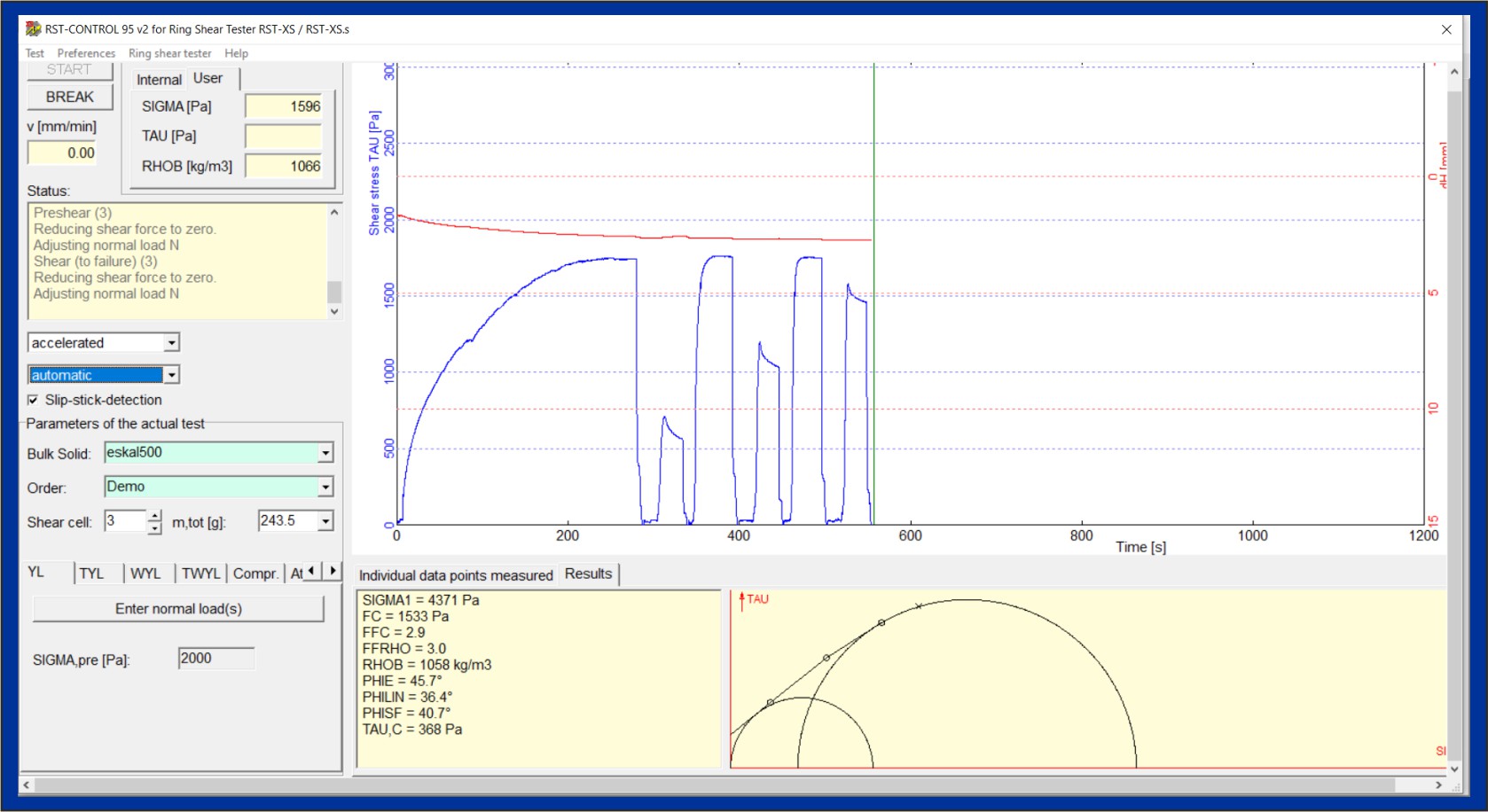 After completion of the test, the measurement data are saved. On the evaluation window (picture below, shown is the previously measured yield locus with the flow properties) the test results can then be viewed in detail or evaluated differently, and printed or exported as a graphic or table. Furthermore, other measurements can be added to compare the test results (e.g. the flow behavior of different samples or mixtures). Furthermore, the output files generated by RST-CONTROL 95 can be imported by the program CAHD - computer-aided hopper design. 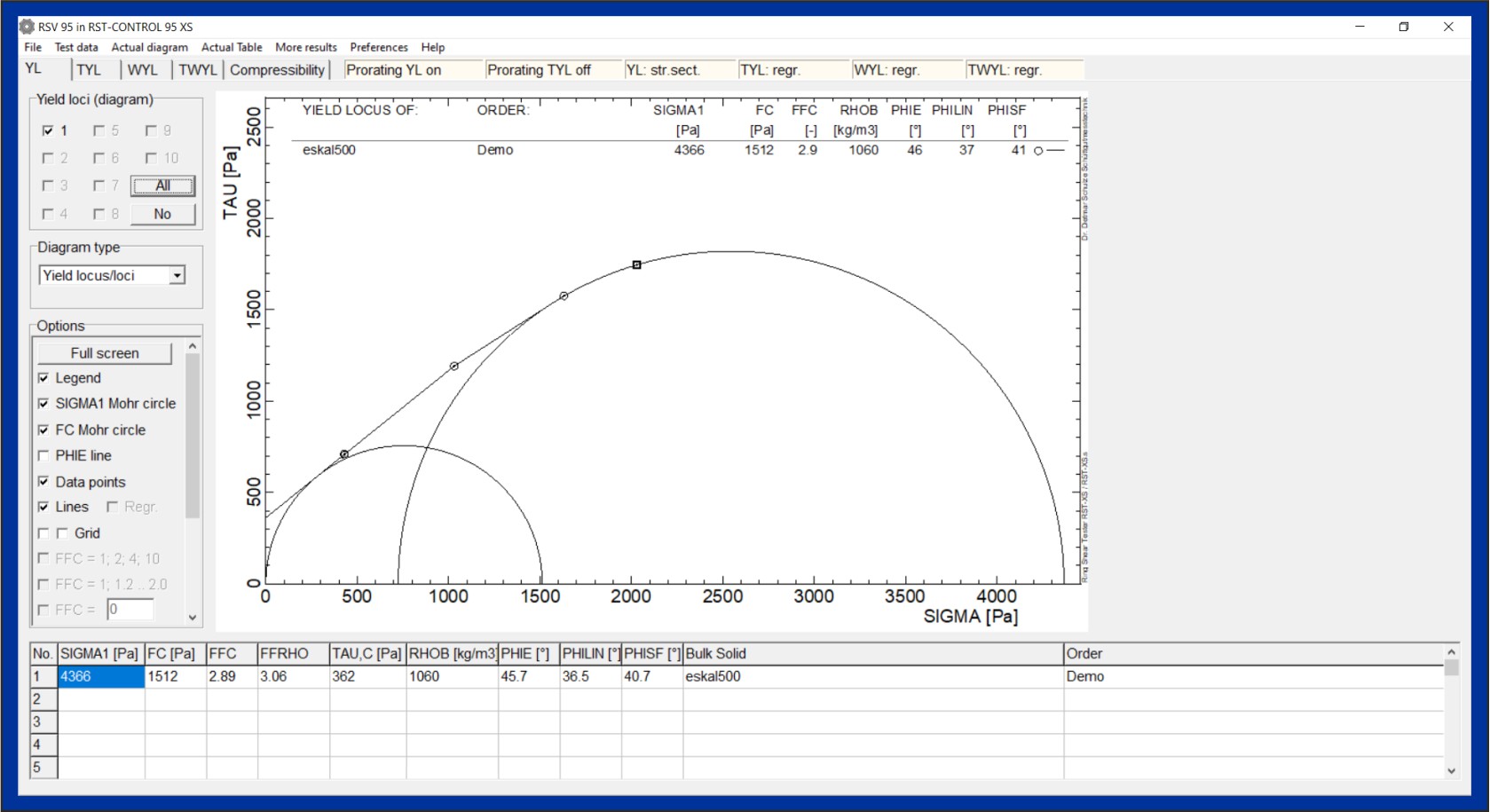